Cover of Wholeness and the Implicate Order

at the end of each year, i often contemplate & write about how i see the world at this particular moment in time, where i am, where i have been and where i am going on my journey of becoming beauty and discovering beyond while living in urbia. 2010 has been an amazing year for me in so many ways – mind ~ body ~ spirit. again, i was thinking about our interconnectedness with each other and with the universe (big beyond) and with the earth (tiny beauty) and with our selves. i remembered something i read when i was around eight years old growing up in Seattle that is attributed to the chief of the Suquamish & Duwamish first nations people (Si’ahl’s supposed “statement” published in the late 1800s) –

these words of wisdom and forewarning remind me of my recent readings and musings on David Bohm, a quantum and theoretical physicist –

The notion that all these fragments is separately existent is evidently an illusion, and this illusion cannot do other than lead to endless conflict and confusion. Indeed, the attempt to live according to the notion that the fragments are really separate is, in essence, what has led to the growing series of extremely urgent crises that is confronting us today. Thus, as is now well known, this way of life has brought about pollution, destruction of the balance of nature, over-population, world-wide economic and political disorder and the creation of an overall environment that is neither physically nor mentally healthy for most of the people who live in it. Individually there has developed a widespread feeling of helplessness and despair, in the face of what seems to be an overwhelming mass of disparate social forces, going beyond the control and even the comprehension of the human beings who are caught up in it. – David Bohm, (Wholeness and the Implicate Order, 1980)

interesting for me to think on and share as we approach
a new year, a new decade, a new opportunity, a new realm,
and as i embark on a new journey « the Butterfly AFFECT »
to tell stories about an amazing group of people working together
to have a positive affect on others (patients, families, friends, communities)
dealing with cancer and their issues, toils, trials, tribulations, and joys
euphorically woven with the fragments of hopes, dreams, and desires,
into a moving testimony of dramatic, emphatic and inspiring moments of
inspiration, despair, love, family, friendship, fear, courage, perseverance, surviving loss and overcoming the odds.
by seeing, understanding and sharing our interconnectedness, our humanity and our compassion,
we can hopefully realize and perhaps make the world a better place ~ for others and for our selves.

In 1854, the "Great White Chief" in Washington made an offer for a large area of Indian land and promised a reservation for the Indian people - Chief Seattle replied (Wiki Image)

The President in Washington sends word that he wishes to buy our land.

But how can you buy or sell the sky? the warmth of the land? The idea is strange to us

If we do not own the freshness of the air and the sparkle of the water, how can you buy them?

Every part of the earth is sacred to my people. Every shining pine needle, every sandy shore, every mist in the dark woods, every clearing and humming insect is holy in the memory and experience of my people. The sap which courses through the trees carries the memories of the red man.

The white man’s dead forget the country of their birth when they go to walk among the stars. Our dead never forget this beautiful earth, for it is the mother of the red man. We are part of the earth and it is part of us. The perfumed flowers are our sisters, the deer, the horse, the great eagle, these are our brothers. The rocky crests, the juices in the meadows, the body heat of the pony, and man – all belong to the same family.

But it will not be easy. For this land is sacred to us.

This shining water that moves in the streams and rivers is not just water but the blood of our ancestors. If we sell you land, you must remember that it is sacred, and you must teach your children that it is sacred and that each ghostly reflection in the clear water of the lakes tells of events and memories in the life of my people.

The water’s murmur is the voice of my father’s father.

We know that the white man does not understand our ways. One portion of the land is the same to him as the next, for he is a stranger who comes in the night and takes from the land whatever he needs. The earth is not his brother, but his enemy, and when he has conquered it, he moves on.

I do not know. Our ways are different from your ways.

The sight of your cities pains the eyes of the red man. But perhaps it is because the red man is a savage and does not understand.

There is no quiet place in the white man’s cities. No place to hear the unfurling of leaves in spring, or the rustle of an insect’s wings.

But perhaps it is because I am a savage and do not understand.

The clatter only seems to insult the ears. And what is there to life if a man cannot hear the lonely cry of the whippoorwill or the arguments of the frogs around a pond at night? I am a red man and do not understand.

The Indian prefers the soft sound of the wind darting over the face of a pond, and the smell of the wind itself, cleaned by a midday rain, or scented with pinion pine.

But if we sell you our land, you must remember that the air is precious to us, that the air shares its spirit with all the life it supports. The wind that gave our grandfather his first breath also receives his last sigh.

And if we sell you our land, you must keep it apart and sacred, as a place where even the white man can go to taste the wind that it is sweetened by the meadow’s flowers.

So we will consider your offer to buy our land. If we decide to accept. I will make one condition: the white man must treat the beasts of the land as his brothers.

I am a savage and do not understand any other way.

I have seen a thousand rotting buffaloes on the prairie, left by the white man who shot them from a passing train. I am a savage and I do not understand how the smoking iron horse can be more important than the buffalo that we kill only to stay alive.

What is man without beasts? If all the beasts were gone, man would die from great loneliness of spirit. For whatever happens to beasts, soon happens to man. All things are connected.

Whatever befalls the earth befalls the sons of the earth. Man did not weave the web of life: he is merely a strand in it. Whatever he does to the web he does to himself.

here are some thoughts, revelations, from another great mind to maybe understand the connection between things existing in space with science, physics, logic, mathematics, philosophy, metaphysics, theology, evolution and ecology.

When forced to summarize the general theory of relativity in one sentence:
Time and space and gravitation have no separate existence from matter …
Physical objects are not in space, but these objects are spatially extended.
In this way the concept ’empty space’ loses its meaning …
Since the theory of general relativity implies the representation of physical reality
by a continuous field, the concept of particles or material points cannot play a fundamental part …
and can only appear as a limited region in space where
the field strength / energy density are particularly high. – Albert Einstein (1950)

lastly, some words from the poet Gerard Manley Hopkins who brought great changes to the form of poetry (running contrary to conventional ideas of meter at that time).

It was a hard thing to undo this knot.
The rainbow shines but only in the thought
Of him that looks. Yet not in that alone,
For who makes rainbows by invention?

And many standing round a waterfall
See one bow each, yet not the same to all,
But each a hand’s breadth further than the next.
The sun on falling waters writes the text
Which yet is in the eye or in the thought.

It was a hard thing to undo this knot.

I have read and agree that he had “an acute sensitivity to the individual nature of perception, to the epistemological status of the phenomenon.”
“He notes carefully that each observer sees and demonstrates through the rainbow a recognition of both intrinsic and extrinsic beauty; the thing as it is and as perceived by the viewer are given equal weight.”
this piece brings me back to the finale & finality of 2010 and to my introspection on our interconnectedness with each other and with the universe and with the earth and with our selves. ~ sb 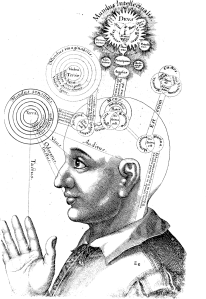