My Memories of my Grand Auntie~Cousin Phyllis Bruce to my Scottish-Hawaiian Bruce Family:
Both Phyllis (and Ruthie, Jim Bruce’s mother) were good to me when i lived with my cousin Jimmy in Lahaina in 1983.
I felt Phyllis was sort of like a Grand-Mother, or a Grand-Auntie to me ~ plus her daughters (Lois, Jean & Lesley) felt like Aunties to me, too (as they were like long-lost Hawaiian sisters to my father).
I am glad i got to spend time with Phyllis more recently at Uluwehi (Grove of Trees, Bruce property on Makawao, Maui) in 2004 as i recuperated from my severe foot injury when she was a mere 99!
I was amazed that ~ she insisted on bringing me tea in bed or in the living room; we stayed up way past midnight on New Years Eve 2004>2005 to watch celebrations around the world; she told me stories of my father living there and of our beloved Nean Bruce Knox visiting there.
She is someone who inspired me that i can & will live past 100.
I am grateful for Phyllis & (her late husband, my father’s first cousin) Bob Bruce’s guardianship and care and concern for my orphaned father when he was a teen. I know how much my father loved living there in the Grove of Trees, especially so after growing up under some harsh realities in Northern Scotland. Our recent trip this September to my father’s homeland reminded us of the sanctuary and paradise and warmth he found at Uluwehi on Maui, after great sadness and loss in Scotland.
I send condolences and love and thoughts and prayers From our Bruce (mainland) Family To our Bruce (Hawaiian) Family.
aloha & love ~ sarah nean bruce

ps: my cousin Lesley Jean replied to this ~ “Mahalo Sarah Nean!! I love your writing, it paints pictures” 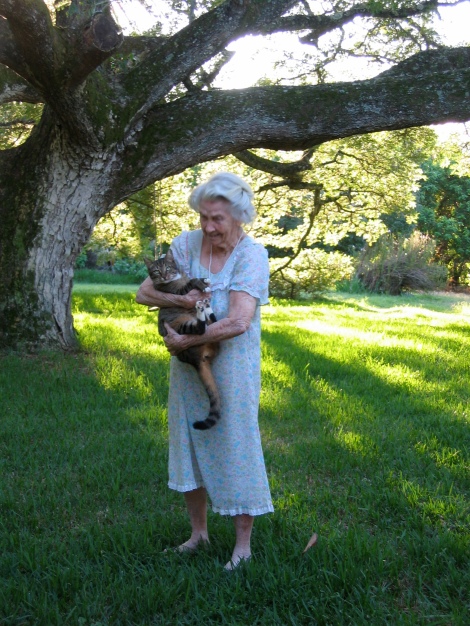 Spirited teacher reflects on Lahaina in the 1920s 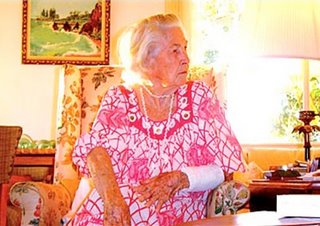 (2006) LAHAINA – Phyllis Carr Bruce is still as witty now as she was 80 years ago.
The former Lahainaluna High School teacher is reaching her 101st birthday this August. But her mischievous eyes reveal a much younger, much less innocent girl.
When asked how she felt turning 100, she replied with a smirk, “I felt the same way I had when I was 99.”
Her daughters, Lesley and Phyllis Jean Bruce, laughed along.
Born in 1905, Bruce was raised in McVille, North Dakota.
Her father farmed and her mother was a teacher. She remembers traveling 12 hours by a horse drawn buggy with her parents and four siblings.
“We had a very happy home,” said Bruce. “We toured the country. We went to Yellowstone National Park and went to California.”
By 1915, Bruce already knew she wanted to come to Hawaii.
Her father had taken her to the International Exposition in San Francisco and she was enchanted by Kumalae’s ukulele exhibition.
“You have to make up your mind early,” Bruce joked
In fact, her father bought her a Kumalae ukulele from Sears and Roebuck. Bruce still has it.
She received her Bachelor of Arts in Home Economics from the University of North Dakota by age 21 and then taught for two years in Moose Lake, Minnesota.
Bruce also studied golf and folk dance classes at the University of Chicago.
“I took some very hard courses,” she winked.
In 1928 it was off to Maui.
Armed with her strong character and letters of recommendation that boasted her teaching abilities, she made the trip alone.
“You started out on the train to San Francisco,” she explained. “Then a ship got you to Honolulu. Then you waited for another ship.”
It wasn’t easy, and it took days of traveling.
When Bruce arrived in Lahaina, it was night and she was all alone. She went to the Pioneer Inn.
“No one was in the hotel,” she recalled. “I went into the first room that looked all right.”
Lahainaluna was hiring at that moment and Bruce landed her teaching position.
She taught home economics, general science and biology and coached the basketball team.
H. Alton Rogers was the principal at the time and he ruled the school with a strict hand.
“He ran a good school,” said Bruce. “He was a little high handed.”
Bruce lived on the campus for one year until she moved in with Mary Couch, the principal at King Kamehameha III Elementary School.
They lived in a house on the beach. “My room had great big windows,” she smiled. “I could almost touch the ocean.”
While most teachers earned ten cents to one dollar per day, Bruce was earning $5.
“It was hazard pay,” explained her daughter, “because of the stoves. She was rich compared to every one else!”
One year later, the Great Depression hit the Mainland and Bruce was sending money to help her family.
But even that didn’t tame her spirits. She still went out and enjoyed herself.
She recalled an incident when Principal Rogers “fired” her for a day.
“I had come back from Honolulu,” she said nonchalantly. “I had car trouble – it rained buckets and wouldn’t start. I got to my campus just in time for my class. It was second period. [Rogers] said, ’You’re excused for the day.’ So I said thank you and went down to Lahaina and we gallivanted!” she declared with a proud smile.
She recalled going swimming every day after school at the Cliff House in Kapalua.
“It was wonderful,” she said with a straight face, “because there were lots of sharks.” She winked, “we scared them away.”
Bruce rode a horse up Haleakala and stayed overnight in a small shack that had open doors and windows, so all the air came in, because according to her, “there was nothing else to do,” wink.
“There was nowhere to get out of the wind,” she remembered. “But no matter how bad the experience was, we were ready for the next one! We had to create our own entertainment.”
Her easygoing attitude is still prevalent. She takes everything in stride and makes a joke out of it.
“One of the things you can expect in life is change,” she stated. “Some is good and some is bad. There are things you can’t change. If you can’t change them, enjoy them.”